A compilation of new South African improvised music and jazz is testament to the power of creating in a communal spirit that honours the ancestors with new conversations.

“Our music is contributive rather than competitive,” the great, late pianist Horace Tapscott said, speaking about the Black community arts movement of south Los Angeles. This forms the core sentiment behind Indaba Is, which is curated by artists Thandi Ntuli and Siyabonga Mthembu and brings together some of the brightest minds and talents in the South African music landscape. The eight-track album is scheduled for release at the end of January by London-based label Brownswood Recordings.

Indaba Is forms part of a series of compilations providing overviews of the jazz scenes in various cities. Previous releases by Brownswood Recordings include We Out Here (2018) in London and Sunny Side Up (2019) in Melbourne, Australia. Importantly, the album centres South African improvised music — and jazz — in the context of ancestral knowledge passed down through generations. 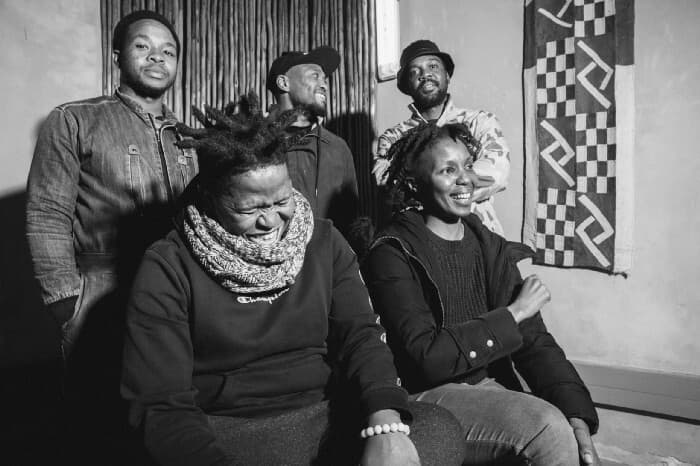 The Brother Moves On with Thandi Ntuli, with whom they perform ‘Umthandazo Wamagenge’ on the upcoming album Indaba Is. 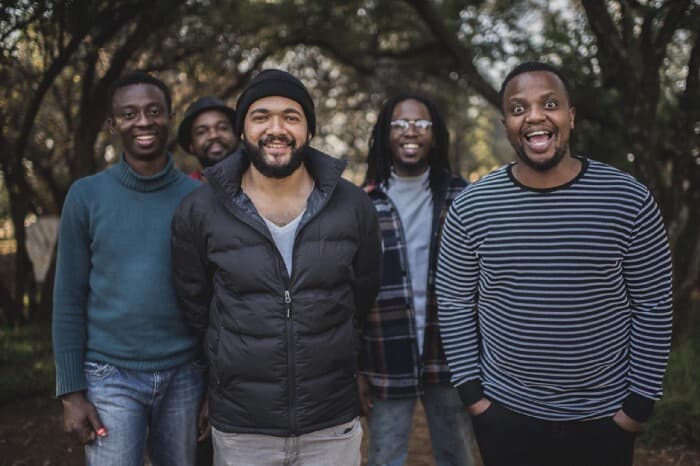 Pianist Bokani Dyer and his band on the first day of recording their song Ke Nako for the Indaba Is compilation.

“It became a realisation for me when we played Le Poisson Rouge in New York for our opening North American tour,” says Mthembu, who performs with The Brother Moves On, Shabaka and the Ancestors and as Hymnself. “The next morning a journalist wrote me a long Facebook message about how, 30 years prior, he had been in the same room watching Hugh Masekela play his first gig in New York. And he had gone full circle into realising what a global powerhouse South Africa is with regards to the jazz idiom, in essence.

“For years I’ve been thinking about what it is that makes our jazz what it is. And it’s the fact that it’s an indigenous knowledge system. It is passed on by players who have travelled into exile and those who have never ever left the country. It’s something that is in the music that I love from South Africa that speaks to my soul. A lot of it would be seen as jazz, but it’s a certain sense of soul music that’s really tied to our consciousness as the indigenous people of this land.”

The album was recorded at Dyertribe Studio, which is on the outskirts of Centurion and run by father-son musician duo Steve and Bokani Dyer. Mthembu describes the recording process as like going to “school camp”, with two bands recording each day and artists floating in and out of the studio continuously. Over four days in June, the collaborators brought together 52 musicians — a notable feat as South Africa was still in a heavy Covid-19 lockdown and musicians across the country had lost most, if not all, forms of work. The videos shared online of the sessions, depicting a room full of musicians, appeared like a dream to the outside world.

The idea for the compilation arose over dinner with representatives from the Brownswood label in London, while Mthembu was on tour with Shabaka and the Ancestors in 2017. The label had just released their Wisdom of the Elders record.

“My interest was sparked by the Kokoroko track Abusey Junction,” Mthembu says, referring to the London-based Afrobeat band’s contribution on We Out Here. “And then I asked them, well, why haven’t you guys pitched a South African one yet?”

When the Brownswood people wondered who would curate it, Mthembu jumped at the opportunity, and received word from the label confirming their interest at the end of 2019. Pianist Thandi Ntuli with her band, whose song ‘Dikeledi’ features on the album.

Describing the recording choices, Ntuli explains: “My feeling was that we could squeeze in as many of the musicians in the scene. It was a matter of using the people who recorded songs as anchors and then bringing along others who are in the scene, trying to mix and match as far as possible. We tried to get a balance of more women-led outfits, but because of the lockdown and where people were at, it wasn’t necessarily possible to have as many women-led outfits as we would have wanted to have on the album.”

Ntuli says one of the most difficult challenges of the lockdown for musicians was having to create and perform in a vacuum. Therefore, everyone loved the opportunity to come together in a studio. “It was a really uplifting space for all of us, just because we were all around each other and music.”

The pair credit Bokani Dyer as the unofficial third producer of the album owing to his hands-on approach in the studio, helping whenever needed to ensure the process ran as smoothly as possible. “The process of recording was great,” says Bokani. “You could feel the sense of community. It was really amazing to hang out with musicians again because it was after the hard lockdown. We hadn’t seen each other for a long time.”

Indaba Is has a powerful resonance with the realities of 2020. Ntuli describes the year as one in which “we saw a massive global response to a continual problem in various parts of the world. We’ve heard of Black Lives Matter; we’ve seen mistreatment of civilians by law enforcement before. But for the first time, this year there was a global response to what was happening, particularly with people of colour.

“I think it is an important time for this message to be coming across because there’s a lot of what the West has been continually perpetuating, which we are collectively saying ‘No’ to. It feels like there is an awakening. I think it is an opportune time for a new conversation to be coming from a different part of the world.” 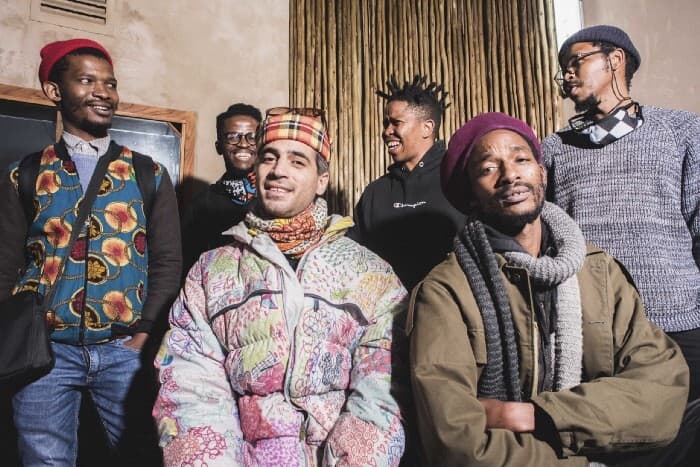 The Ancestors in studio while recording their track ‘Prelude to Writing Together’.

Mthembu explains that he wanted to make people consider the music on the album as a form of indigenous knowledge and “not as an add-on to the commercial scene, in essence. That’s why they find it so hard to classify our music, because a lot of what we do has to do with tradition and with channelling.

“It’s a statement to say that indaba is. It’s a constant. It’s not an ellipsis. It lives despite all of us, despite the decolonisation movement, despite Fees Must Fall, despite everything that’s moving on. It’s a knowledge system that is still accessible to us. And I’m more interested in how we archive it so that future generations can access it with ease, and so that it doesn’t simply become an add-on to European culture only,” Mthembu says.

All the tracks on the album were recorded live. Some of the songs existed previously in other iterations, but they were rearranged to host many more musicians. Others were new contributions. For example, the first single off the album, Bokani’s Ke Nako (Now’s the Time), is scheduled for release on his upcoming album, Radio Sechaba, but gets rearranged with different artists.

“Ke Nako is a song about unity and coming together to build the nation that we want to see, taking ownership and being an active participant in the future you want to see. I thought this message would fit well with the idea of a spotlight on South African musicians, and the sound is distinctly from here,” says Bokani.

The second track, Umthandazo Wamagenge, has featured in different forms on Ntuli’s previous albums. But here it is reworked by The Brother Moves On, inspired by a phone recording of a rehearsal they did together. Mthembu contextualises the track: “It’s us trying to reinvigorate the kwaito track that made our 1998 and made our festive season. And to show that jazz kids aren’t boring, practise-in-the-music-department types only. We come in different colour ranges and this is one of those.”

What Is History by The Wretched invokes the voices of Black Panther Kwame Ture and revolutionary leader Winnie Madikizela-Mandela. Another standout contribution is Abaphezulu (They Are Coming, Those Who Are Above), a call to the ancestors by Iphupho l’ka Biko featuring Kinsmen and Hymnself. The track was recorded by a 13-piece band who were fortunate to include pianist Zoe Molelekwa for the session before he left to study abroad. Other contributions are led by Lwanda Gogwana, Sibusile Xaba, The Ancestors and Ntuli. 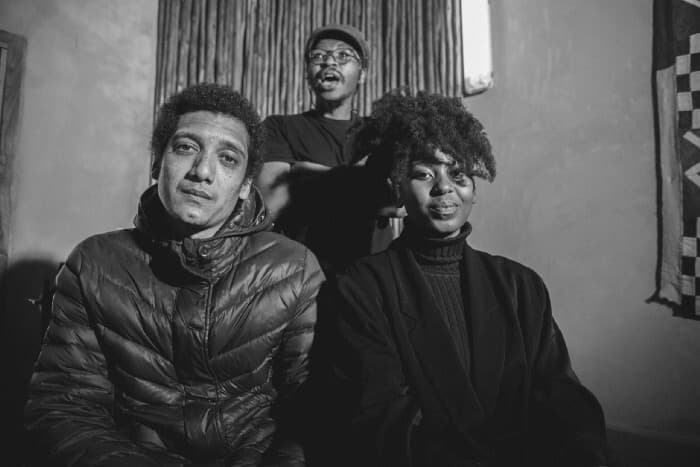 The Wretched in DyerTribe Studio while recording their track ‘What Is History’.

Indaba Is honours the idea of creating as one communal spirit. Mthembu explains that even using the word “producer” was problematic for him. “Leadership, where we’re from, is not about being in front of your people, but being able to assist the groupthink towards where it wants to go.”

Ntuli expands on this: “I think we’re in a space where we have a lot to contribute to this music, improvised music. And it’s wonderful that we are putting this project out in a time when I believe that the world is in dire need of embracing more African ideology. Because the way the world is going right now, we’re going to mess ourselves up. 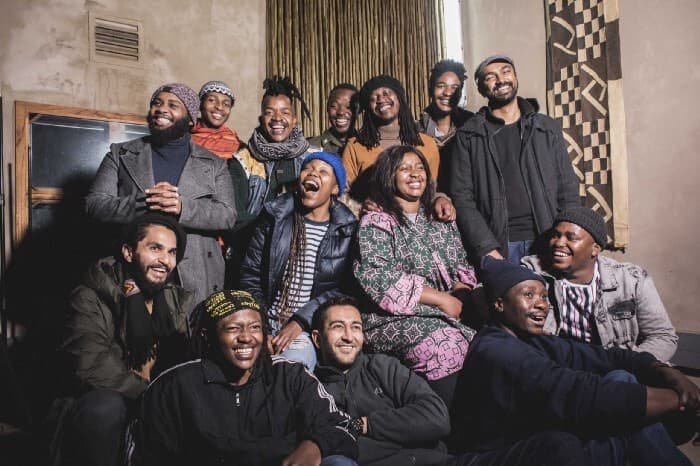 “The spirit of community that was at the heart of this project is something that I feel is a way of life for us here and is something that should not be stripped away from us. I think in many ways we are becoming more individualised, which is a threat to us as we become more modern or global.

“But I think it is a time where we should be having the conversation of us giving something to the world — not in terms of an extraction-type of relationship, as it has been in the past, but in terms of this is what our perspective is and this is how it can be useful for the world today. I think there’s a lot about who we are and how we do things as Africans that people can learn from,” says Ntuli.

On final reflections about the record, Mthembu says: “As a people who come from a majority Black country, it can’t be about having one person in the room who represents this alternative culture. It’s about time we make those spaces and make those roots, because the kids are coming up and they don’t need to become the exception. We are finding a way to tell our stories from our way and understanding, and not the other way around.”

Indaba Is is available for pre-order.

This article was first published by New Frame.