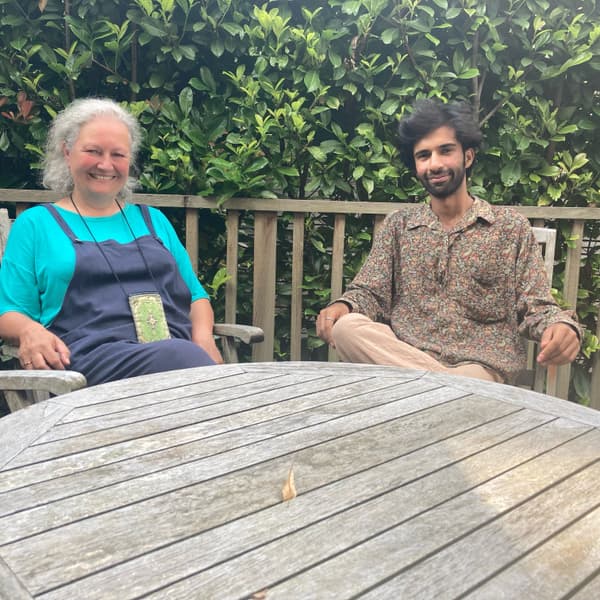 On this month's show, Haseeb is joined by musician, composer and mentor Jilly Jarman.

As the founder and Creative Director of Bluejam Arts, Jilly is responsible for one of the UK's largest music mentorship programmes of the last 20 years, nurturing the musical journeys of tens of thousands of students since 2002.
Founded in Penrith, Cumbria, Haseeb and Jilly speak about the state of the arts in the North of England and exchange insights on the often London-centric perspective which can dismiss other parts of the country's culture. They trace Jilly's journey, born in Birmingham in 1956, studying in York in the 70s before moving to London and then deciding to settle in Penrith where she has remained since, influenced by her friends who ran Tomorrow's Warriors in the capital. They navigate her own musical journey, learning to play a number of instruments from a young age and talk about what it was like playing in an all-female punk band at a time where that was less common.
They contemplate the importance of mentorship, as Jilly explains that BlueJam was initially born out of teaching music to children who were excluded from school. She uses those children as a template to explain why she believes everybody has an element of creativity within them; highlighting that it's often about whether that can be ignited by a mentor. The pair speak about the importance of a DIY attitude when it comes to creating infrastructure, especially when there is a lack of funding, sharing insights on their love of informal spaces as tools to aid grassroots culture.
An unheralded hero who has been a pivotal pillar for this country's musical fabric, tune in for a fascinating two hours of conversation that contextualises much of the culture we enjoy. The chat is accompanied by music that Jilly has picked out which reflects her life, including tracks by her two daughters who have been a huge influence on her.