The BLK JKS return around the sun

Returning with new album Abantu/Before Humans guitarist and vocalist Mpumelelo Mcata speaks about the band’s process, the importance of endurance and the meaning of a fresh start. 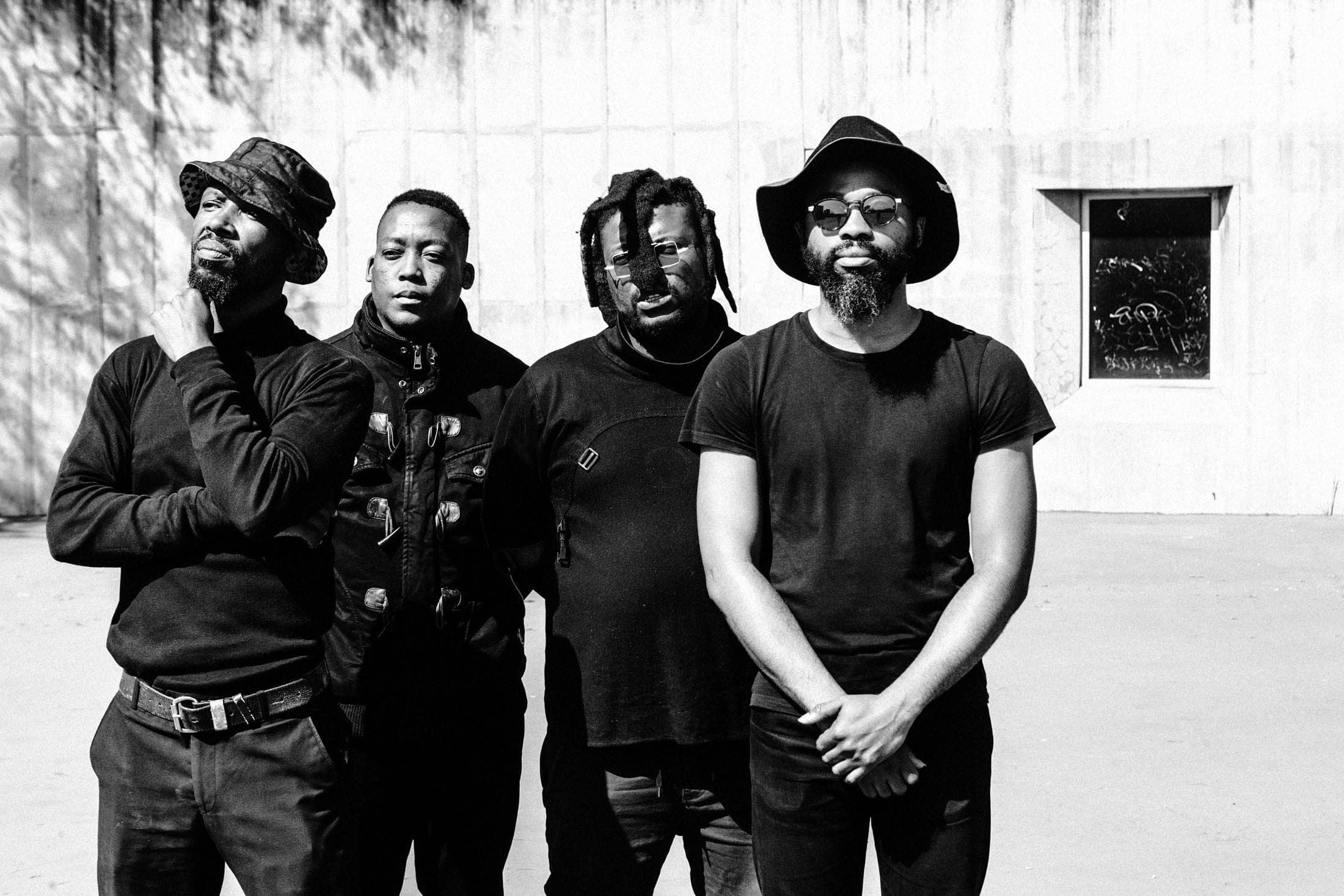 "We are the BLK JKS and you are awesome for being here. Thank you for coming out and risking your lives for us. We’re here, together,” Mpumelelo Mcata tells the crowd at a recent gig in Cape Town.

Twelve years after their debut album, they released Abantu/Before Humans on 21 May.

More than a decade ago, the BLK JKS were one of the most important bands in the country, and groundbreaking for many reasons. Four Black guys from South Africa in what was called an art-rock band was a novelty to Western audiences and the South African mainstream alike. They toured extensively, becoming a favourite at festivals such as South by Southwest (SXSW), and were signed to a prominent indie record label. The band attained the kind of success most would need multiple lifetimes to achieve. 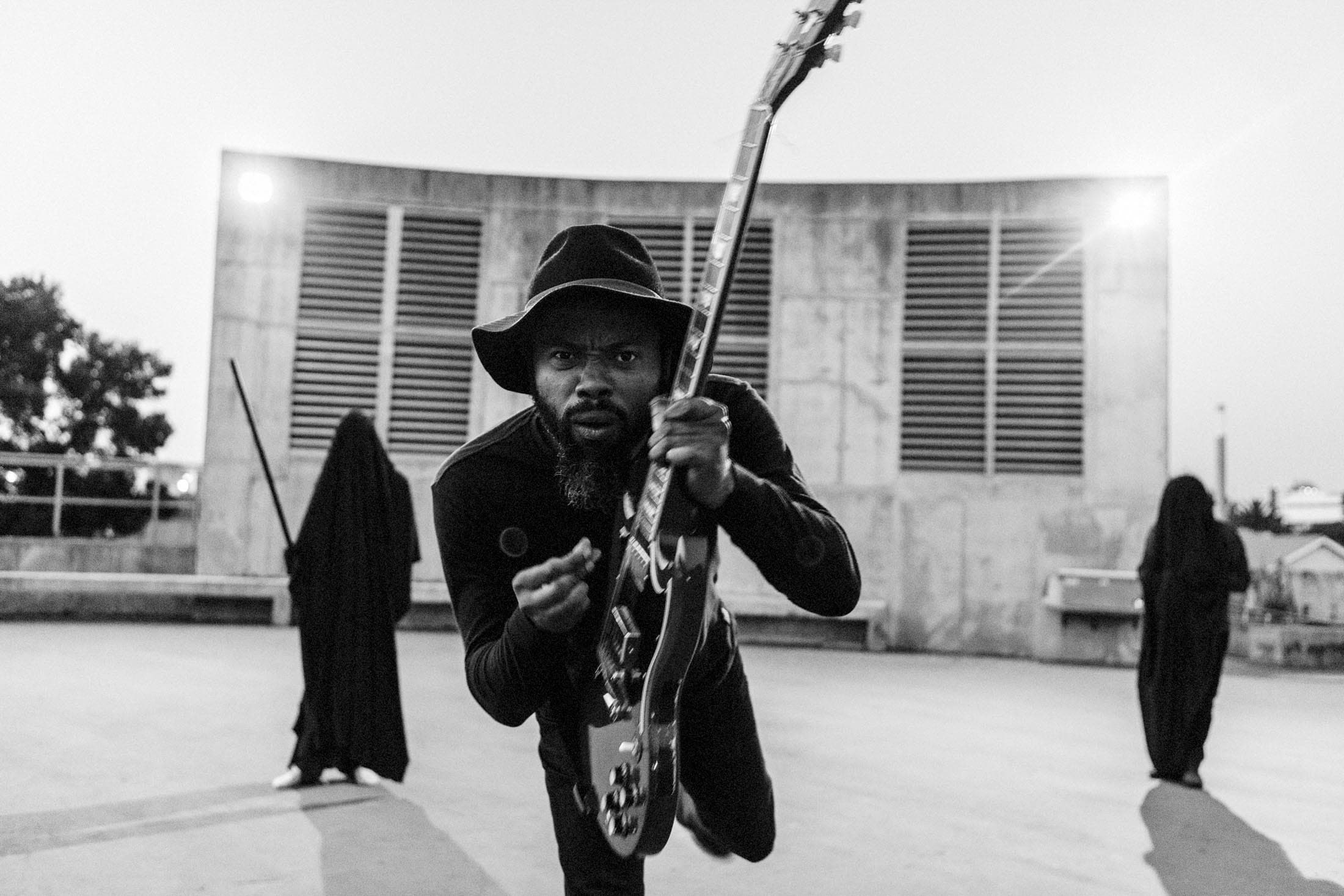 6 August 2019: Vocalist and guitarist Mpumelelo Mcata describes the long journey to the recording of the band’s second album. Mcata also shot the music video for the single Harare. Photograph by Brett Rubin

But the face of the band changed over time. Vocalist Linda Buthelezi departed in 2012. Trumpeter Tebogo Seitei joined the remaining members – Mcata, drummer Tshepang Ramoba and bassist Molefi Makananise – in 2013. And between albums there was fatherhood, maturity and new interests. The world is an entirely different place now, too.

Despite regular attempts, it took 12 years for the band in its current form to produce their next full-length album, all the while holding on to the desire to get back to the essence of the music that brought them together in the first place. At the end of April, they played two venues in Cape Town. It was their first time together in front of an audience in years. It was also the first time they’d performed their new album. Witnessing the iconic band launch this album felt like watching elders in the making.

The BLK JKS released their debut album, After Robots, in 2009. It came out after years of performing.

“For some people, it seemed like an overnight thing, but it took years to get to a debut album … We started jamming together in 2004,” says Mcata. Their rise to fame was sudden and garnered them many accolades. “In those days, there were more gigs on the table than there were days in the year.” 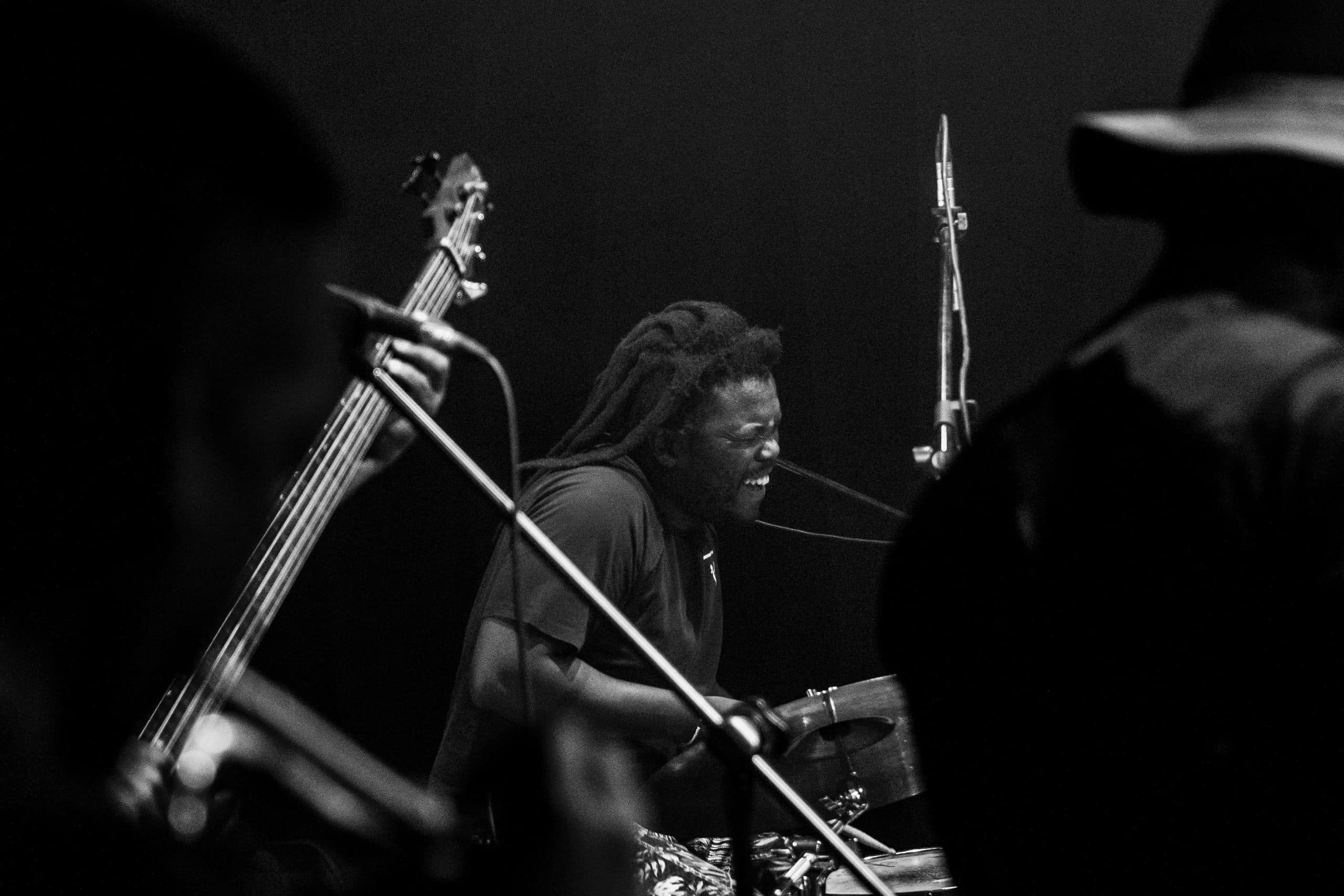 The band toured and performed locally and internationally, releasing two EPs along the way, Mystery (2009) and Zol! (2010). Some members also performed as BLK JKS Soundsystem and in groups such as Motel Mari.

The BLK JKS decided to record a new album in 2018. “We spent June and July in the orchestra pit under the stage of the Soweto theatre,” says Mcata. “We built the studio and brought in all our equipment. We had to get licences from the City of Johannesburg. And it was quite something, but we did it.”

But when they returned to listen to the recording a few days after making it, they found the orchestra pit had been burgled and the hard drives stolen. The band looked at surveillance footage at the Jabulani Police Station in Soweto, but a pillar blocked their view of the culprits. These recordings remain lost. 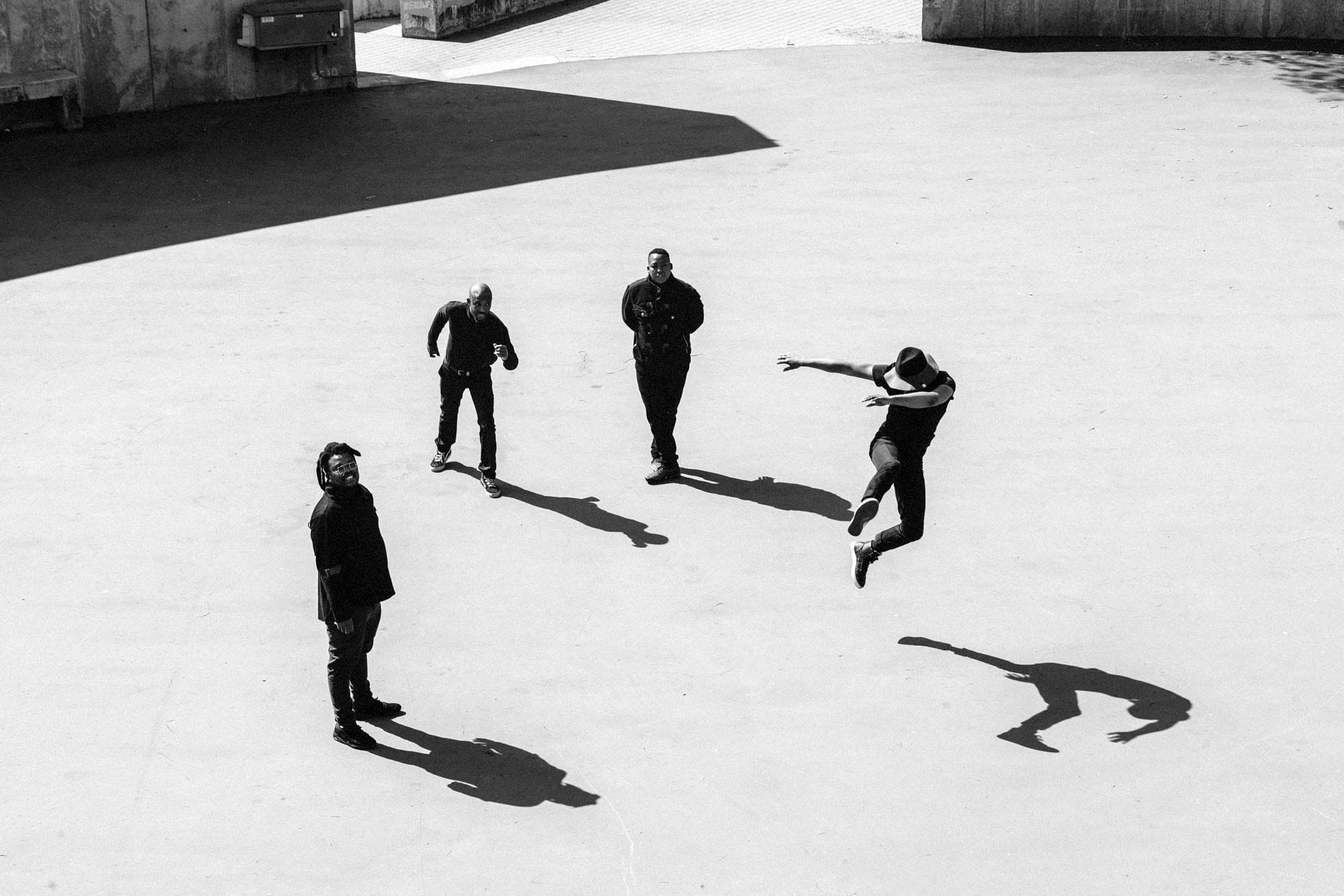 3 August 2019: The BLK JKS have paved the way for many Black alternative artists in South Africa to create their own musical path. Photograph by Brett Rubin

It took a year for them to return to the studio. “During that year, there were many existential questions. Are we still a band? Should we quit? It’s been 10 years, what’s the point?” Mcata says.

Each member had moved on. Ramoba had set up a production company and was working with other artists. Makananise was living on a farm, teaching music to children in rural areas. Seitei was playing with the Soweto police band. Mcata had begun to work in film.

But in 2019, after playing a gig with friend Thandiswa Mazwai and feeling rejuvenated, they got back into the studio and recorded the new album in just three days. “After over a decade of wrestling with how … … why … thinking about record labels and everything, we realised we don’t have to think about all of that. We just have to play the music,” says Mcata.

“It felt like a time for awakening and going back to some fundamental part of how we used to put things together as a band for ourselves. Because I think we got comfortable with the label, [and if you do], you lose that thing.”

Ramoba had mixed, mastered and produced the album by the end of 2019. Cape Town label Permanent Record pressed a limited run of 300 LPs. A performance was scheduled for SXSW and everything was set in motion to press reset. “It was going to be like Saturn’s return, because our international career began at SXSW in 2008.

“We thought, this is really happening. We finally have the album. We’re going to get on this flight to South by Southwest. We’re going to go pound the pavements again. Punk rock. Let’s do this! … And then we get to the US embassy and get handed the yellow notes that there’s this thing called Covid.”

Their live plans were put on hold. Mcata packed up his studio flat in Braamfontein, Johannesburg, and rushed to move to France with his then pregnant wife before the borders closed. The band worked out two record deals instead during lockdown, signing to international labels Glitterbeat and We Are Busy Bodies.

In many ways, Abantu/Before Humans is a prequel to After Robots. Mcata says there are things on the album that could have been fixed, but “because of how it all went down, we wanted to keep some of those moments of vulnerability and imperfection”.

“If you listen to After Robots, you can taste the metal,” he says. In contrast, the sound on the new record is more natural, closer to how the band sounds in the studio without being over produced. “It was a gift to have been able to do it like this because I think what’s now on record is so much more urgent, raw and earthy.”

For Mcata, After Robots is an album that enters in the middle of a story. “It’s like a high-speed car chase and you’re just coming into consciousness, whereas with this one, we’re starting from pre-Big Bang. It’s just dust. It’s just the voice and the sound and feeling that you get from the uhadi. The return to the Earth … to the root, before humans.” 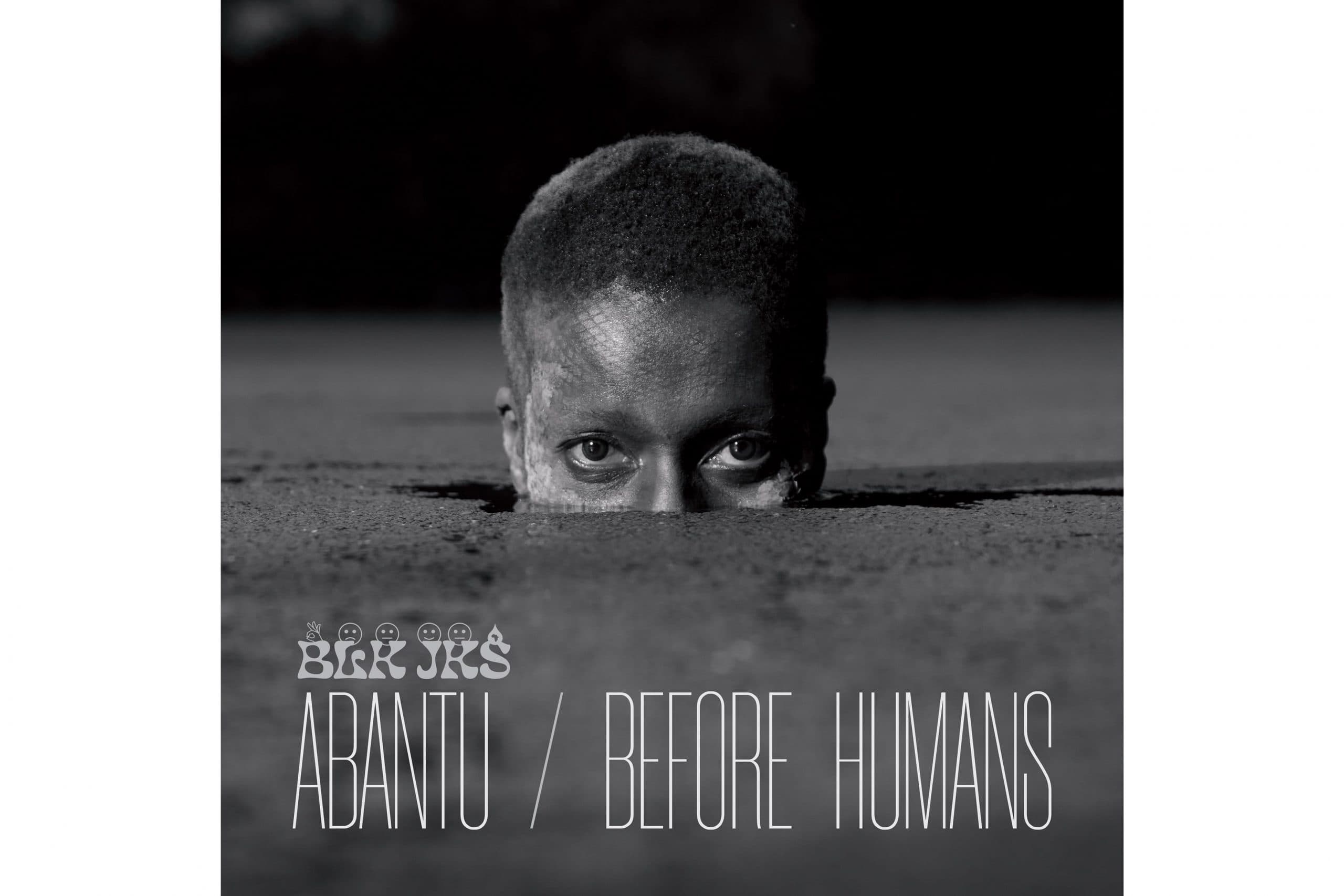 This album shifts the way the band has been perceived to more accurately reflect their lineage. The addition of trumpet, played by Seitei, directs listeners to a jazz history and heritage, which has always been there but was never addressed directly. Kwaito is also an influential sound, with the band members all growing up in the 1990s.

“We’re always spoken about or compared to bands in the rock genre. Psychedelic rock, math rock, prog rock, avant rock… you name it. But there’s not a lot said about what we’re referencing in terms of roots and where we come from. And our reference points, which are the real things that we’re wrestling with.” He is referring to the influence of artists such as Malombo, The Beaters/Harari, Hugh Masekela and Busi Mhlongo.

Mcata flexed his directorial muscles to create the music video for the single Harare, featuring enigmatic singer and rapper Morena Leraba. Visual artist Nandipha Mntambo graces the album cover and appears in the video. Another close collaborator, artist Zen Marie, was the cinematographer. The result is a kind of tone poem on human nature and a meditation on migration.

It made sense for Mcata to direct the video. He has moved steadily into filmmaking over the past decade, creating the documentary Black President for artist Kudzanai Chiurai in 2015. And with Ramoba on production, there is a definite push from within the band to control the direction of their work. 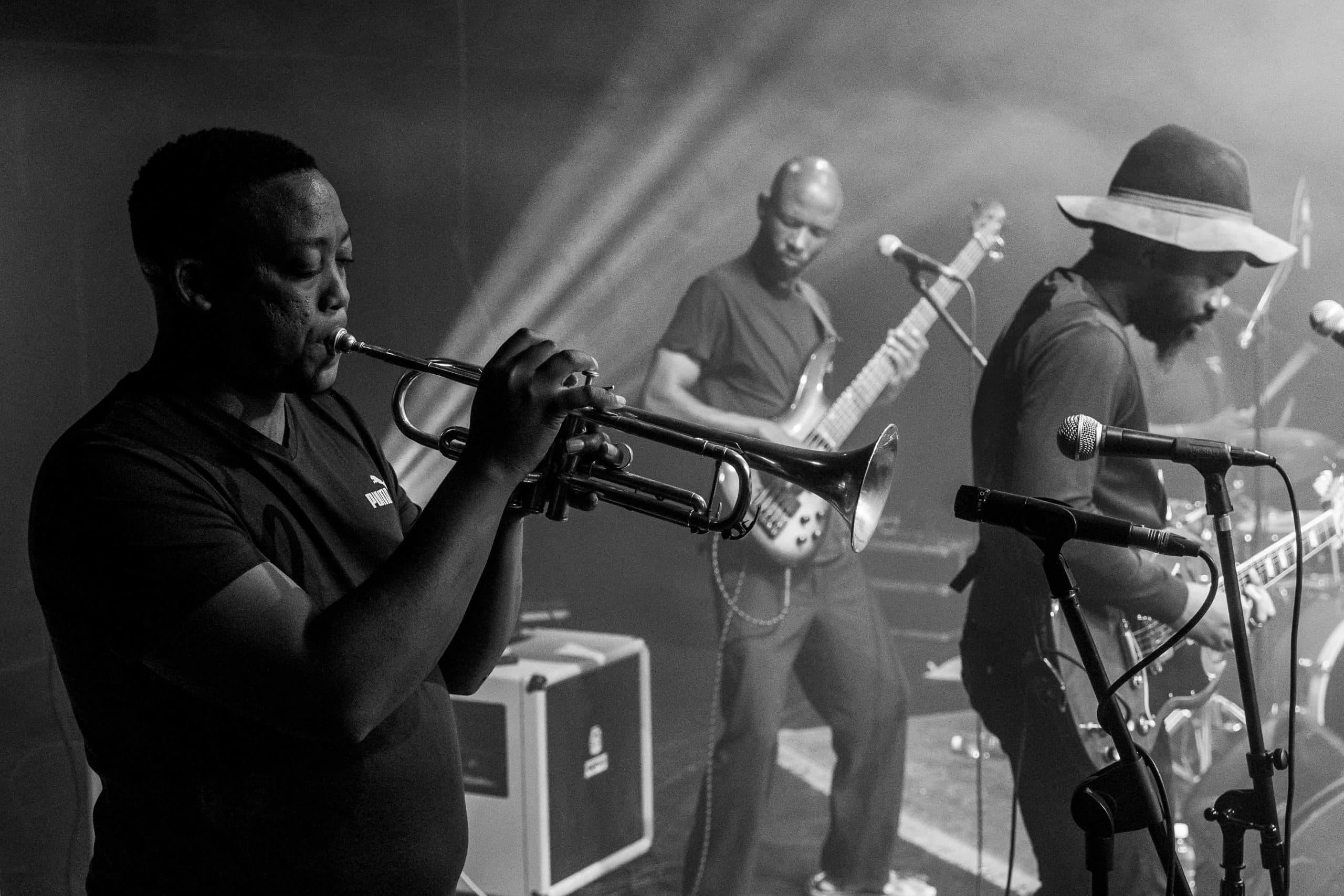 1 May 2021: The band recently played a gig in Cape Town, their first performance together in two years. They showcased new material from the album. Photograph by Wade Fyfe

“This has been a big part of getting a second chance. What would you do in your wildest dreams, if you had another shot? And that’s what’s beautiful. We have nothing to prove and nothing to lose. It’s kind of like we’re walking on water.”

But it is their recent live performances in Cape Town that have re-energised the band. “The gigs in Cape Town were the first we played in about two years,” says Mcata. Being “back on stage in front of actual people, not a live stream … was really transcendent and reaffirming” for him.

“All the way from Rhodes Must Fall, to Fees Must Fall, to Black Lives Matter, and even now, with what’s happening in Palestine, I feel this moment has been a kind of reckoning and meditating around the question of everyone asking themselves, ‘What are we doing?’ Which is why the album also feels timely for us. Because musically and conceptually, it’s exactly all of these things.

“In the end, we figured that doing this band thing is what we really wanted to do. It’s really important … We were thinking about who we were before [the] BLK JKS existed and what we felt was missing in our world, and then the motivation to continue was found. And that’s kind of where we’ve been, finding ourselves and finding our way back here.”

The BLK JKS have set a precedent for alternative Black artists in South Africa to feel confident following their own paths. What remains all these years later for the artists is their skill as musicians, and their work that will be talked about for generations.

This article was first published on New Frame.